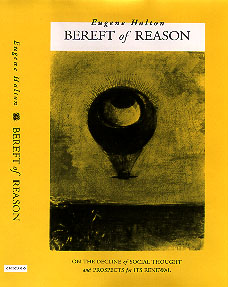 On the Decline of Social Thought and Prospects for its Renewal

On Bereft of Reason:

"This is an original, incisive, and badly needed book. In prose as vigorous as his argument, Halton addresses issues urgent in many disciplines, as well as in our common culture." --Robert N. Bellah, University of California, Berkeley

"Without wishing to descend into hyperbole, I cannot recommend this book any more strongly. Halton has accomplished a tour de force...His passionate, articulate prose is a welcome antidote to the scientistic, jargon-ridden norm. The physical qualities of the book, its binding, typesetting, and overall design, match in quality its intellectual content. Bereft of Reason deserves the widest readership: there has been no stronger or more telling critique since [C. Wright Mills's] The Sociological Imagination." --Michael Keaney, Cultural Dynamics

"[Halton] takes the 'ghost in the machine' as a dominant defining metaphor for modern thought and life, and criticizes it with gusto, wit, wide reading, and philosophical acumen." --Robert J. Mulvaney, Review of Metaphysics

"Bereft of Reason is a thoughtful critique informed by a passionate commitment to the renewal of critical concerns. For this reason alone it should be widely read and inform current debates." --Lauren Langman, Sociological Inquiry

"Halton's energetic and insistent pursuit of several important themes regarding contemporary social life and the theories which try to account for it make this a rare and fascinating book." --Alan Sica, Pennsylvania State University

"My positive responses were largely to the criticisms of contemporary social and sociological theory, my negative ones to the harangues against the modern condition....The ups and downs of my reaction to the book ended with the final chapter, in which admiring assent displaced even strong approval. When Halton writes that 'rational maturity means living in the gap between rational comprehension and the sense of things which never gets completely comprehended' (his emphasis) I can only marvel at the sheer rightness of the statement."  --Dennis Wrong, Contemporary Sociology

"Halton undertakes to challenge numerous assumptions common to both defenders of modernity and its postmodern critics as well as to set a new direction for social theory. Its extensive critical commentary is directed not only to much of the contemporary philosophical scene, but in general to the broader intellectual ethos of our times, including various currents within the arts and social sciences. The principal object of Halton's critique is something that he terms 'cultural nominalism,' a view which he asserts is pervasive throughout modern culture and which entangles much of our thought within dubious and outworn dichotomies.

What is urgently needed, he proposes, is the abandonment of these and other standard dichotomies of modern thought and the formulation of a pragmatic, nonfoundationalist conception of reasonableness. Halton argues that virtually all of modern social thought has its roots within a falsely dichotomous worldview, and that providing for its renewal requires nothing less than 'a more fundamental questioning of the entrenched premises of the modern era itself.'

Social theory, Halton argues, must remain mindful of the manner in which culture and the self remain continuous with natural processes, as well as the manner in which reason itself remains irrevocably tied to sentiment, imagination, and organic life. Reason must retain a broader connotation than mere 'rationality' understood along positivistic, utilitarian, or even critical theoretic lines. It is a human capacity intimately associated with the passions and with mythic and metaphorical modes of comprehension. A proper account of social reason includes forms of reasonableness reminiscent both of organic philosophy and of the pragmatic tradition." Paul Fairfield, Philosophical Books, 1997

"This bold, important book challenges the fundamental assumptions of current social theory, identifies the vital contributions of recent thinkers who have been consigned to 'intellectual oblivion,' and indicates promsing prospects for the renewal of thought and culture. It merits serious attention and invites response." --Frank G. Novak, Jr. Clio: A Journal of Literature, History, and the Philosophy of History

In this radical critique of contemporary social thought, Eugene Halton argues that both modernism and postmodernism are damaged philosophies whose acceptance of the myths of the culture/nature dichotomy make them incapable of solving our social dilemmas.

The recent vogue of social theory for the social sciences, literary and cultural studies, and philosophy, has brought with it the promise of breaking down unnecessary boundaries and overturning stale canons. Yet Halton claims that the dominant ideas today tend toward emaciated theories of meaning, viewing human conduct as consisting of talking heads, reading heads, of spectatorial heads reduced either to enacting a convention or acting out "differences" from conventions. Far from being able to confront the self-destroying calamities of our time, they form an intellectual opiate. From defenders of the modern project, such as Juergen Habermas, to postmodern critics such as Richard Rorty, Stanley Fish, Jean-Francois Lyotard, or James Clifford, there is all too often an uncritical acceptance of the nominalistic premisses of "the ghost in the machine."

Bereft of Reason argues that the leading social theories of our time remain shackled to the modern myth of "the ghost in the machine." In Halton's view most contemporary attempts to provide better theories of rationality or alternative theories of antirationality assume the dichotomy of a spectral view of reason and mechanical view of materiality which underlies the modern era, and, in his words, "the modern error."

In chapters ranging from the codification of social thought, to the concept of life, the cultic roots of culture, and so-called "neopragmatism," Halton claims that contemporary thought has lost touch with the biosemeiotic sources of reasonableness. Some neglected paths in twentieth-century social thought and philosophy of the past century, particularly the work of Lewis Mumford and Charles Peirce--as well as someone very much in the contemporary picture, Vaclav Havel--together suggest an outline for a new and non-modern basis for contemporary thought. In the author's view a more fundamental questioning of the entrenched premisses of the modern era itself is urgently needed, which requires critically delving into the deeper sources of reasonableness, which modern thought has tended to deny or degrade. Modern culture reified physicality while etherealizing the perfusion of signs in which we humans live and by which we evolved into humankind: signs which bodied us forth from an organic nature which is far more mysterious than a mere machine, no matter how complex a machine nature is conceived to be. The human person is far more than simply a form of knowledge, social construction, or contingent difference in Halton's perspective, ultimately the self is an organic social being infused with the spontaneous passions of life, capable of feeling, experiencing, and empathically responding to the communicative environment, as well as rationally judging him or herself and the world, rightly and wrongly.

Bereft of Reason is a passionate plea for a fundamental reexamination of the entrenched assumptions of the modern era. Dealing with issues of vital concern to modern societies, it should appeal to readers across a number of disciplines.

1. The Codification of Social Theory

2.  Of Life and Social Thought

3. The Cultic Roots of Culture

5. The Transilluminated Vision of Charles Peirce

7. The Neopragmatic Acquiescence: Between Habermas and Rorty