We had several favorites, too. The catchy riff of Tow Truck Man gives way to sly, double-entendre-filled lyrics that promise all the women a real good time!

The disc includes three more visits to the [Muddy] Waters songbook, but also serves up a couple of fun originals, most notably Tow Truck Man, written by Gene Halton,

in which Buck delivers amazingly like his master. Marty Gunther, Bluesblast Magazine

OFF THE WALL BLUES BAND

Named after a Little Walter tune, Off The Wall Blues Band is one of the hottest bands to storm out of the Midwest blues scene. They are a tight five-piece band with a forceful sound that ranges from traditional to contemporary and beyond. Featuring harpist Jumpin' Gene Halton, this and based group delivers with exuberance and passion. They have done a number of gigs with 's well-known vocalist, The Tail Dragger, and with former Chess recording artist, Bobby Stone. They have opened for Huey Lewis and the News, Son Seals, and Koko Taylor.

il Blues Magazine from Milan, Italy noted: "An unusual and right-on melting pot, in my opinion, are these five characters who give muscle, brain and blood to the Off the Wall Blues Band...This is a jolt of life and originality in the boring discographic panorama of the past few months."

As Living Blues Magazine said, "Off the Wall Blues Band plays in an old fashioned '50s style that you don't often hear from revival bands these days." 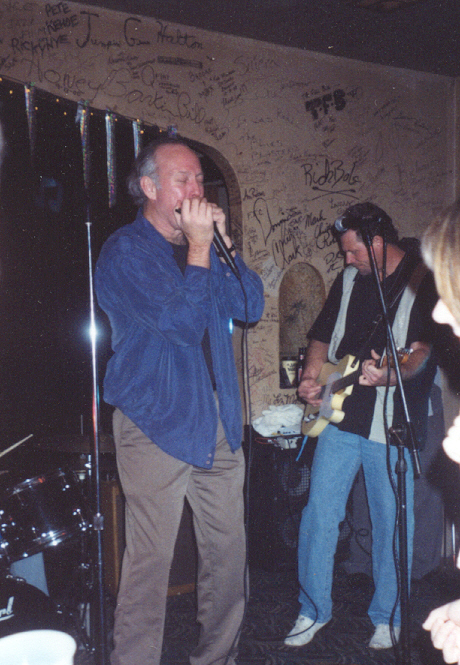 Jumpin' Gene Halton
has toured with Pinetop Perkins and Dave Myers, performed with Hubert Sumlin, S.P.Leary, Sam Lay, Lurie Bell, Jimmy Johnson, and Jim Schwall, and opened for Bobby Bland and Son Seals. He performed in the 1993 Zurich Jazz Festival with the Oliver Morgan Rhythm and Blues Band of New Orleans, returned to Europe in 1997 with fellow band member Lorenzo Thompson, on a tour with The Next Generation Blues Band starting in Prague...

"Halton's harmonica creaks and vibrates all over [the cd] in smoky, warm tones."-- Press, 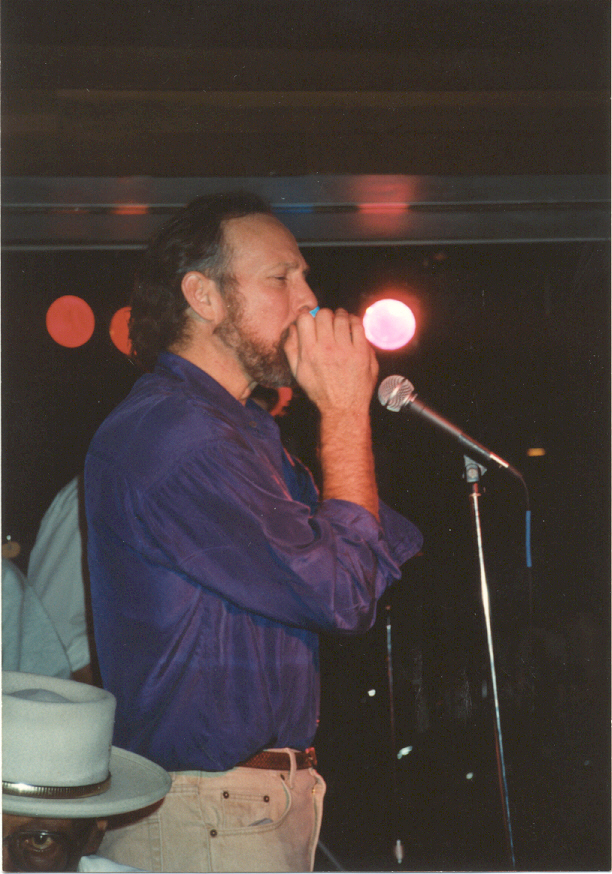 A photo of Jumpin' Gene appears in the 1996 Chicago Blues Calender in the month of February.

where Jumpin' Gene's name comes from.

If you can read the fine print, you can click to way back when Gene once played drums in a Dixieland Band

and Jumpin' Gene's Off the Wall Blues Band 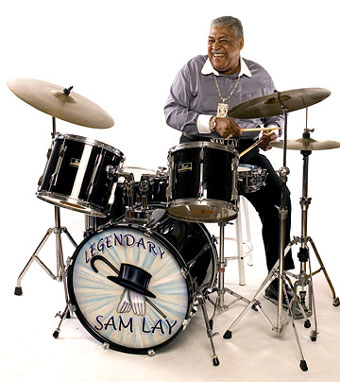 Sam Lay drummed on the classic early Howlin' Wolf recordings on Chess records, and later with the Paul Butterfield Blues Band. That band backed Bob Dylan at his controversial electric performance at the 1965 Newport Folk Festival and on his album Highway 61 Revisited, also showing the range of Sam's career. He was widely featured in the seven part series on the blues produced by academy award winner Martin Scorsese. Sam will not only be singing and doing some drumming at this show, but also showing his abilities on the guitar: maybe even some Johnny Cash!

The show also featured the return of Rockin' Johnny to active gigging after six years. He's been tearin' up Chicago, and now is primed to peel the paint off The Midway Tavern walls.

ONE TIME ONLY (until next time) PRODUCTIONS
PRESENTED

He listened to and learned from, and gigged with, the great Howlin' Wolf, who also gave him the name of Tail Dragger. The Tail Dragger's sense of phrasing, of call and response, of freely leaving space, and of the ritual hypnotic that is the source of music's entrancement, all deliver one to that zone wherein real music happens. As he once put it: "I just sing the low down blues and sometimes it's like I'm in a trance...Something hits me and I'm overpowered. "  See newspaper article: Good Timin' Grooves 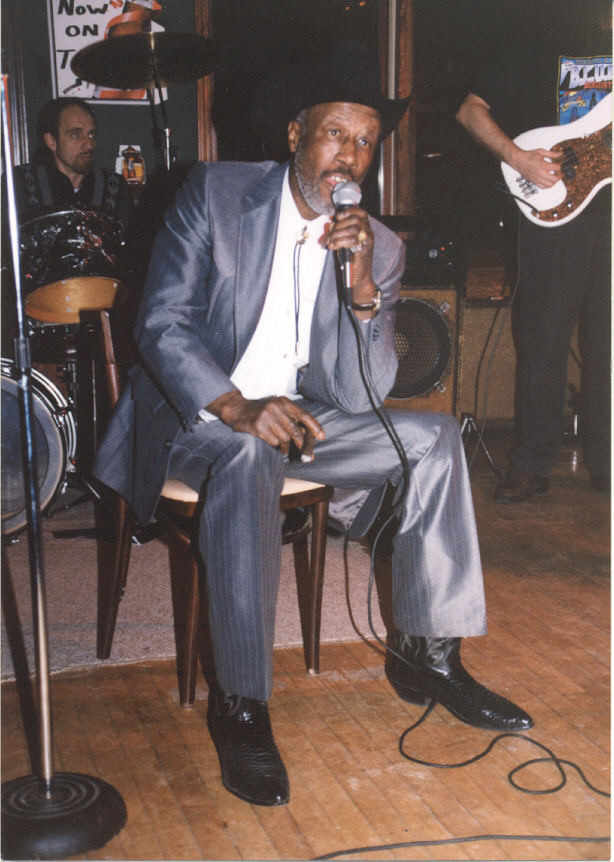 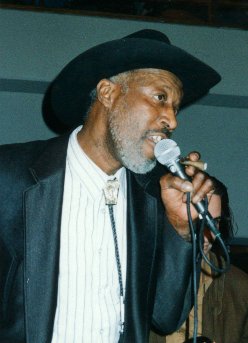 --Here is the band live in front of 5000 people, from the 1998 Blues Festival, with Bill "Sticks" Nicks on drums and Lorenzo Thompson, vocals:
Ain't Superstitious
Click here to see more on  Billy Sticks Nicks

New CD to be released

and from
Harbor Country Blues Festival
in Three Oaks

Click it!   Chicago Blues Extravaganza   at the Midway Tavern

twas Friday the 13th of July and the blues were at the Morris Center for the Performing Arts in South Bend
...and it was... 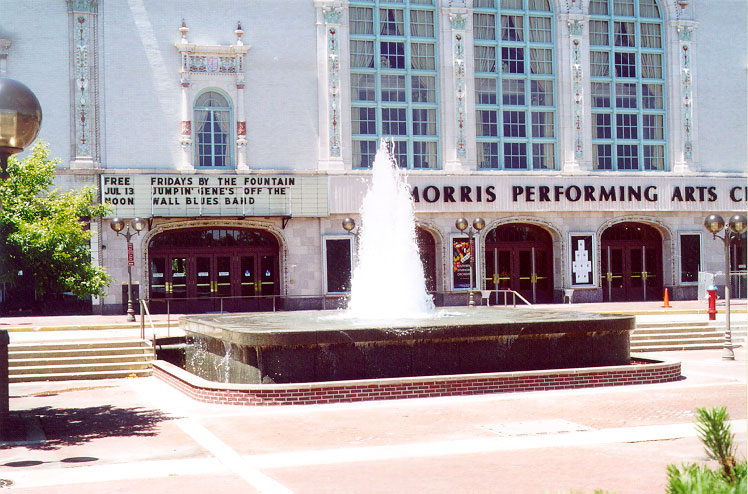 The band featured some of the area's top players, including Bobby Stone, vocals and guitar,
Bill "Sticks" Nicks on drums, Little Frank Krakowski on guitar, and Jesse Lee on bass
Dig this snippet from the concert: click on Lovelight 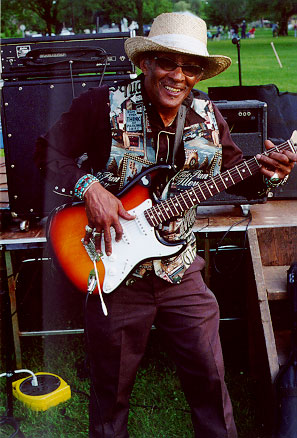 and Don't miss this shot!
And  more photos,  July 13, 2001 at the Morris Civic
Bobby Stone and Jumpin' Gene
(compliments of Julie LaFollette) 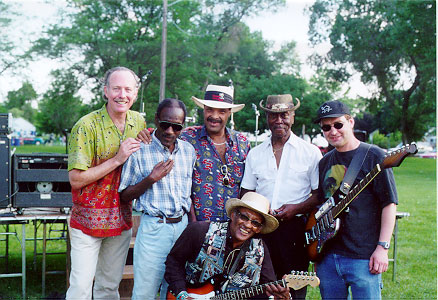 Click it!   Chicago Blues Extravaganza   at the Midway Tavern

Some of the guitarists the band has worked with include:
Rockin' Johnny Burgin
Kevin Shannahan, who's been touring with Jimmy Burns
and doing a number of gigs with Tail Draggerr
Mike Dotson, a seasoned Chicagoan, (when not performing with Magic Slim and the Teardrops.)
Eddie Taylor Jr., son of blues legend Eddie Taylor. 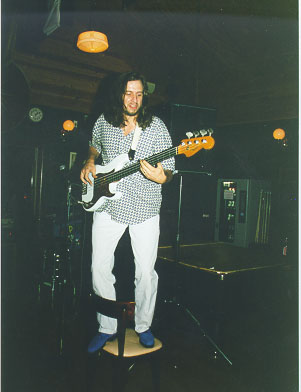 ... bluesman, having toured...
photo by Vicky Darnell
...extensively and recorded with Eddie Burks. He has also toured with another Chicago legend, former Howlin' Wolf guitarist Hubert Sumlin, performed in Chicago with Homesick James, Big Smokey Smothers, and Merle Perkins, and jammed with Buddy Guy and Jr. Wells, Taj Mahal, and John Hammond. Earlier Baker played gospel with Sonny Thompson, who is also known as a producer at both King and Chess records. John claims that he's never been to prison, except as a visitor.

Drummer Rob Lawrence, pictured here at Off the Wall "Chicago Extravaganza" gig  at the Midway Tavern with Eddie Taylor Jr. and Liz Mandville-Greeson, has performed with a wide array of Chicago musicians. He can be heard on Taildragger's most recent recording on Delmark, American People. 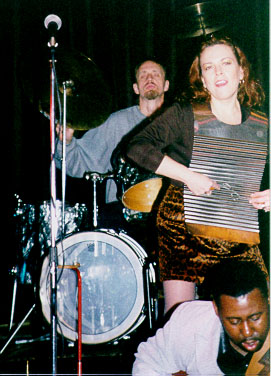 Click here to hear the band in a live performance--
--with former singer Lorenzo Thompson:  I Got to Leave You
Or another: 24 Hours


Click here to see a photo of Little Walter's grave.

And click again to see Little Walter and Muddy Waters 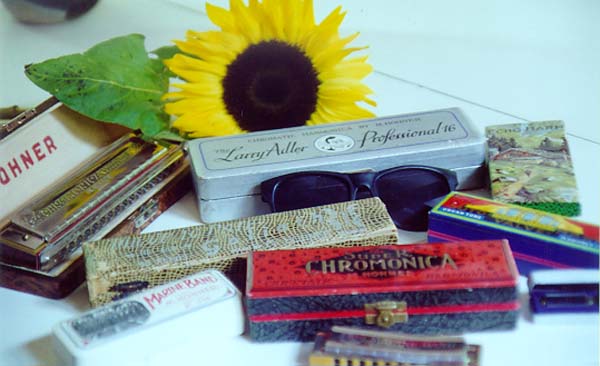 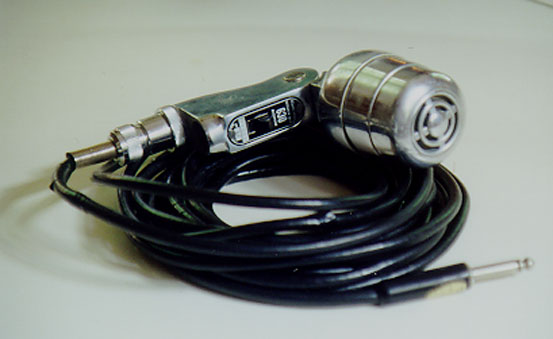 There's nothing like an old EV mike, made in Buchanan, MI!